So my best friends birthday was coming up in may and she had told me that she wanted some cozy socks like I had made for her son´s birthday in january.
His socks were based on a pattern called tv socks that are a knit pattern which has been very popular in Iceland since television got here in the sixties.
Unfortunately the pattern is only in Icelandic. 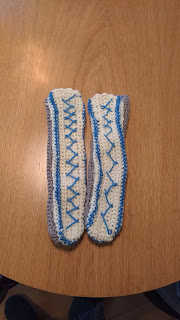 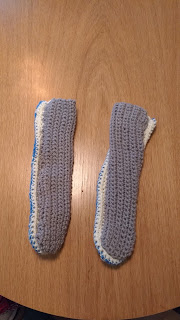 So when it came to my friends socks I was running late her birthday was almost here so I found socks that were very easy and I liked the look of them.

Here is the pattern

I decided to make the cuff longer then in the pattern
I used aran weight yarn, the one that come is the huge skein.
I really liked the pattern, I find some crochet pattern way to complicated with weird vocabulary.

I also finally learned to make a front post back post ribbing and I really like it. I don´t think I will be doing the other kind of crochet ribbing again. I always found it annoying to make the ribbing and trying to fit it to a garment.

My friend really liked them 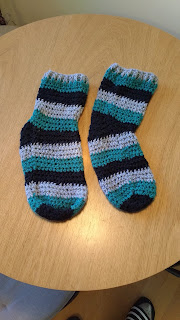 Posted by Hjördís at 6:32 PM No comments: